Summer Safety Week: How to Protect Your Home in a Flood

Home | Blog | Summer Safety Week: How to Protect Your Home in a Flood

Summer Safety Week: How to Protect Your Home in a Flood

In 1993, there was an historic flood throughout the Mississippi Delta and its tributaries. I was a child at the time, but I remember hearing my parents talking about the river rising and the chances of the levee breaking. I didn’t understand what was really going on at the time, but I remember that we took steps both at home and at school to be prepared for if the flood came. We were spared that year but thousands had their lives ruined. Forecasters are saying that this year may be the year that we see a devastating repeat of the Great Flood of 1993.

The Great Flood of 1993 was a devastating blow to America’s heartland. Over 30,000 miles of land were underwater when the river was at its highest point. Of course, river flooding is always something that we take into consideration here. It’s part of our everyday lives. Most of Arkansas sits right at or below sea level. The only parts that don’t are the Ozark Mountains and Crowley’s Ridge.

To the east of us is the mighty, muddy Mississippi River. The Mississippi River is commonly referred to as just “the river" around here because most of the time it’s the only one that really matters. In 1993, unseasonably large amounts of snow in the winter and rain in May combined to create a terrible natural disaster. The Great Flood of 1993 blew all the records out of the history books. It is the one we don’t want to ever see beaten. And they’re saying it might very well be beaten this year.

The 1993 flood broke all the rules about where it was supposed to flood and where it wasn’t. This one may be the same. Flood preparedness is something that is taught to those of us that grew up in the delta from an early age. So let’s talk about how to keep you and your family safe during a flood.

Floodwaters are some of the most damaging things that Mother Nature can throw at us. When it floods, it isn’t like a tornado that it comes in and does the damage and then it’s gone, it sticks with you until everything is dry. Most flood waters come from nearby rivers and tributaries. That means that the water is filthy.

And when I say filthy, I mean nasty. Like if you have ever swam in a river or visited a dock on a river you know what I’m talking about. Oil, dead wildlife, pollution, and sometimes even human waste can come in with the flood. Ick!

Unfortunately most homeowner’s insurance policies don’t cover flood damage. That’s a separate policy and if you live in a flood prone area it is something that you will want to look into. When my husband and I were house hunting we had a really good local real estate agent. He made sure that we understood which houses that we were looking at were in flood zones.

Any home that is in a flood zone that has a mortgage on it is required by the mortgage company to have flood insurance on it. If you have an older home or you are renting, make sure that your policy covers flood damage. The easiest way to do this is to give your insurance agent a call and ask them.

My husband and I made sure we purchased a house that was not in a flood zone. In fact, it’s on top of a hill and all the water runs down to a small creek behind the house. 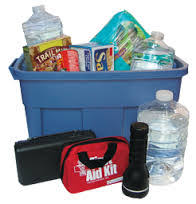 When I was 8, I remember my mom and dad packing an emergency kit. This kit had a couple of changes of clothes for each of us, some toys for me, a first aid kit, our toiletries, my dad’s medicine, emergency rations (no Twinkies don’t count), bottled water and all of our important paperwork.

I went to school talking about it and almost all of the kids had the same thing going on at home. These emergency kits are essential in these kinds of situations. My dad put it in a large plastic bin and sealed it with duct tape and then put it in the back of his truck. The theory was that if we had to get out in a flooded condition, the truck would make it further than the car would.

Then there was the repeated discussion of what to do if the water rose too high. We went over the evacuation plan multiple times. If we were at home we were just going to grab the cat and run, but if we were at school and work, we had a place to meet and people to call. I had a small notebook with several phone numbers of close family members that I was to call if I hadn’t heard from my parents after 2 hours.

The other part of the evacuation plan was to shut the power off. That was my dad’s job. No matter where he was, his first job was to go to the house and shut the main electrical line off. Knowing what I know now, that was something really smart to plan to do. Water is so damaging to electrical systems. If you cut the power off and check everything before you switch it back on, you could save yourself lots of money in damages.

So you’re at home and you see that your area could be hit with flooding. What do you do to try to make sure your house makes it through? There are some steps you can take that will protect your home from invading waters. Keep in mind, though, none of these are foolproof. Water may still get in to your home.

If your foundation has any cracks or openings, you will need to close them with mortar and masonry caulk or hydraulic cement. The cement may be a tad bit more expensive but it will expand to fill any crevice completely. If water is already a recurring problem, you may want to have a professional come in and do an assessment on your foundation or basement. 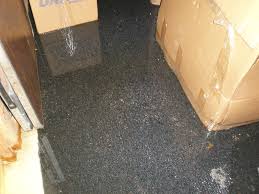 A sump pump is incredibly useful especially if you have a basement. You can get one for a bit cheaper that is powered through a power cable, but if the lights go out you won’t be able to use it. Invest in a battery powered one. It won’t remove all of the water, but it will keep the flooding in your home down to a minimum.

Assess which items will be incredibly expensive to replace or can’t be replaced at all. Move them to higher ground. If you have a multistory home, then just simply move them to the second or third floor. If you are in a single story home, move them to the attic. We recently built a shed that has a second floor loft, that is where we would move things if we needed to.